Opportunities for Australian audiences to experience the rich tradition of Chinese opera are rare, so this tour of the Legend of the Chinese Song Fairy – the first outside China – is a welcome entree to the form.

Set by the majestic Li river in mountainous Guangxi province, it stages the myth of Liu Sanjie (Jiang Ning), a renowned singer of mountain songs and folk hero known as the “song fairy”.

Liu is no shrinking violet. We meet her midstream on the river, where she refuses to make way for the pleasure-boat of a passing prince, and challenges a princess aboard (Wang Jiayuan) to a singing contest to see who must yield. 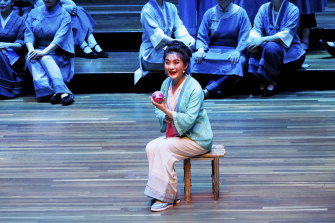 Liu is victorious but doesn’t stray far. The local peasants, charmed by her voice, convince her to stay and so she enjoys the hospitality of a kindly old man (Qian Zhiguo), his son A-niu (Wu Pan) and daughter Zhou-Mei (Yang Yue).

When the family fail to pay rent to corrupt landlord Mo Huairen (Ren Hanfu), he plans to seize Zhou-Mei or the land. So Liu challenges Mo to another singing contest, offering herself as a prize if he wins. She bests three scholars by insulting and humiliating them in song. She’s wonderfully insolent, singing “Where in the classics does it tell you to be such opportunistic cowards?” and comparing them to snails.

The swelling choruses to undulating river music are a highlight.

A romance develops between Liu and A-niu, but Mo and his minions won’t accept defeat, abducting her by force. A-niu drowns after a failed rescue attempt, and when Liu refuses to become Mo’s concubine the tyrant plans to execute her. Salvation comes with the timely arrival of the singing princess, who deposes Mo and sets all to rights. 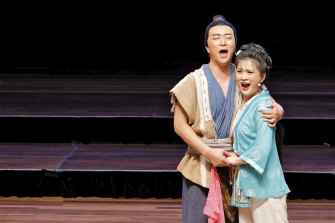 The concert-style production doesn’t have an elaborate set, but the grandeur of the vocals more than compensates. The swelling choruses to undulating river music are a highlight, and Jiang Ning as the song fairy has an irresistible pluck, a needling defiance and a much sharper tongue than many European opera heroines, shifting between high-romantic arias and playful riddling and invective inspired by Chinese folk song.

Opposite, Wu Pan’s A-Niu matches her for passion with a resonant, forceful tenor, and the supporting cast sings well, even if the villains tend towards caricature.

Western audiences will find interesting echoes of the familiar opera repertoire – the plot combines ritualised song contests and a musical philosophy reminiscent of Die Meistersinger, with the corruption and sexual predation of Tosca – but the delight of the new should draw opera lovers to explore Chinese tradition. On that score, Song of the Chinese Song Fairy proves beguiling.