A Confucian dance drama has taken the stage at Lincoln Center in New York, and who better to direct it than a descendant of the philosopher himself.

Four performances of Confucius will play out at the David H. Koch Theater at Lincoln Center from Thursday through Sunday before the show travels to the John F. Kennedy Center for the Performing Arts in Washington from Jan 13 to 15.

"Confucius is somehow defined by people nowadays who know mostly about his philosophy," said director and choreographer Kong Dexin, who said she is a 77th-generation direct descendant of Confucius.

"So for a dance, which uses body language, I want to present his unsuccessful experience as a persuader to publicize his philosophy," Kong added.

Confucius was organized by the China Arts and Entertainment Group (CAEG) and performed by the China National Opera & Dance Drama Theater. It had its world premiere in 2013 at the National Center for the Performing Arts in Beijing and has since played throughout Asia, Europe and Australia.

Critics have described the production as "a cultural calling card for China" (The New York Times), "incredibly beautiful brought to life by some of the most exquisitely talented dancers a wonder to behold" (Arts on the AU).

With traditional Chinese music, opulent costumes and expressive choreography, Confucius tells the story of the legendary scholar's journey through the kingdoms of the various Zhou dynasties (BC 1046-256) and his quest to instill codes of ethics, honor and benevolence among the empire's rulers.

Told in six sections, Inquiry, The Chaotic Time, Out of Food, Great Harmony, Mourning for Benevolence and Happiness, the drama's structure reflects the inner and outer struggles of Confucius in expressionistic passages of dance and song through one of the most turbulent and significant periods in China's history.

More than 2,000 years ago, Confucius founded Confucianism, a philosophy that has had a far-reaching influence on China.

After the book The Analects of Confucius (a collection of sayings and ideas attributed to Confucius and his contemporaries, compiled and written by his followers) was translated into Latin by Italian missionaries about 400 years ago, Confucius' thoughts spread around the world. 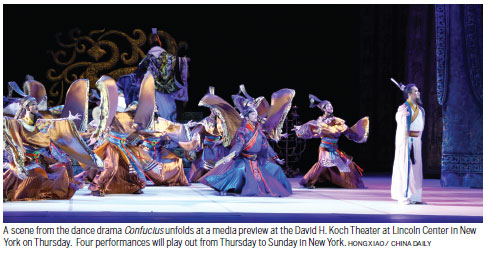